In this post, I will discuss with the help of two real examples about `if` reflection point i.e., when user-supplied input reflects back as a part of conditional statement in JavaScript. Please open the following URL (our harmless XSS probe string "xxxxxxxx'yyyyy</img is part of GET parameter q). The screen-shot given below shows the reflection of our interest i.e., part of conditional statement.

The screen-shot shows that developers're using single quote (') for holding the value of user-supplied input and ' from the probe string ("xxxxxxxx'yyyyy</img) is not filtered or encoded. Further </ is also there in hard-coded form. One potential way to XSSed this case is '-confirm(1)-'. This will execute because at the time of expression evaluation inside `if`, our proof of concept JavaScript is executed. The URL at the time of XSSing is: http://www.pressdemocrat.com/search?q=%27-confirm(1)-%27 and the screen-shot is also given. 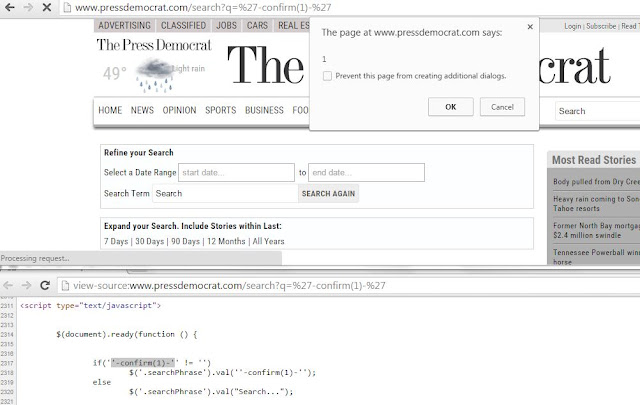 For the sake of completeness, I wanted to XSS this case with the help of </script><script>confirm(1)</script> but realized that this does not work even though </ was not filtered or encoded as I mentioned earlier when we're looking at the probe string reflection (see first screen-shot on the page). In short, the URL does not result in an XSS:

I decided to dig deep and found that they have some sort of filtering in place. The screen-shot given below shows the XSS vector </script><script>confirm(1)</script> does not reflect back at all.

If you will come across that type of case, I would suggest try the following valid variations (there are some others ... please figure out and take it as an exercise, now you have a live test-bed from the wild) and have already seen in the wild (at least 3 to 4 different occasions) that they work and bypassed the filtering mechanisms. The valid means: browsers render it.

The following URLs result in an XSS (choice is yours) and the screen-shot related to the %0a case is also given. The effect of %0a can also be seen in the screen-shot. 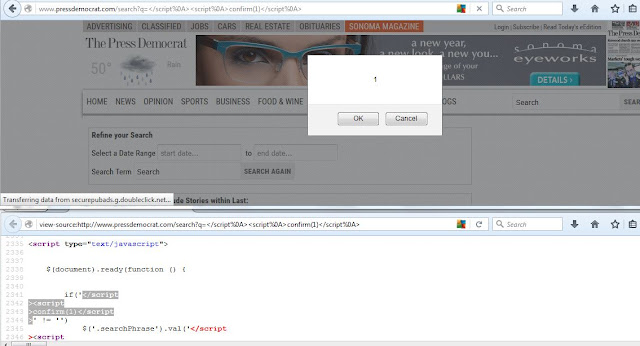 Now lets see another example from the wild. Please open the following URL (our harmless XSS probe string "xxxxxxxx'yyyyy</img is part of GET parameter rgnCd). The screen-shot given below shows the reflection of our interest i.e., part of conditional statement.

The screen-shot shows that developers're using single quote (") for holding the value of user-supplied input and " from the probe string ("xxxxxxxx'yyyyy</img) is encoded. Further < is also in its HTML encoded form. It seems no chance to break the context but the point I wanted to make is `if` is also a reflection point in the wild. Some of you might remember the blog post I did for breaking the SAP's SuccessFactor's XSS filter. In that case, the reflection of our interest was also part of conditional statement.